(click here)
Click here to purchase Tamco Primers and Clearcoats
﻿ Home Made Planishing Hammer | How to Paint Your Own Car, Auto Body Discussion Forum and Videos

This is a very useful tool when it comes to metalwork. Simple yet effective, check out these directions for building one yourself on a tight budget! 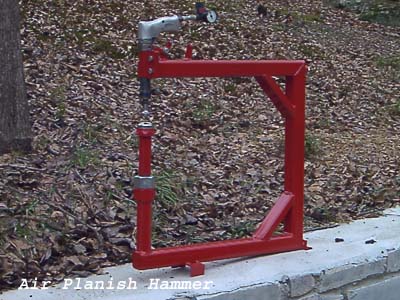 #1. Buy one stick of 2"x2" mild steel square tubing with a wall thickness of at least 83 thousandths eight feet long. The thicker the better.

#2. I used a chop saw to miter the corners to 45 degrees to make the frame, shaped like a rectangle missing one side. I clamped the sections down on a rail of my 4 post lift and tacked the corners first on one side then flipped it over and tacked the other.  The reason to tack it first is you can muscle it or hammer it into submission. The whole time I kept checking with a framing square the corners to keep it as square as possible. I used the cut off pieces to triangulate the intersections of the corners for additional strength. I'm not giving exact dimensions because you can decide how deep of a throat you want. Mine has a 23" deep throat and is 24" high. 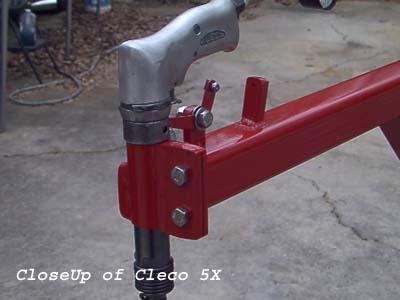 #3. I researched air hammers on the net and found out that air hammers are rated by stroke length and hitting power. They are rated 1x through 10x. the larger the number the harder they hit. I settled on a 5x riveting hammer mainly because there was one used on the net. Riveting hammers have a feather-able trigger unlike muffler cutting air hammers. (Check the net for aircraft tools used)

#4. I made the air hammer receiver by taking a piece of tubing slightly larger than the barrel of the hammer and slitting it long ways. Next I cut two pieces of 3/8"x 1"bar stock the length of the piece of tubing. I placed them in a vise and drilled two holes the size needed to tap 3/8" coarse thread bolts through both pieces in alignment. I tapped one piece and opened the holes on the other for clearance. I then bolted them together and welded them to the tubing on either side of the slit. In effect making a band clamp to grip the barrel of the air hammer. (I'm fortunate that in my town is a major nut and bolt company, Mableton Nut and Bolt. I live in Conyers, Ga and I don't know why it's called Mableton Nut and Bolt).

#5. I used a drill press and a hole saw that would leave a hole the size of the outside diameter of my band clamp to locate the clamp on the top of the frame at the very end. I then clamped the frame in a vise and used a level to level the frame in the vise. I then took a plum- bob on a string to locate and center the post for the anvil on the lower leg of the frame. (The anvil post is what the air hammer strikes on) I then cut the top hole in half crossways leaving a half moon to weld in the clamp.

#6. I found another piece of tubing that a large grade five bolt 1& 3/8" x 14" would slip into. I also bought two nuts and washers for the large bolt. I took another grade eight bolt 1& 3/8"x 3'' bolt to a machine shop to have the 3" grade eight bolt threads cut off and turned to 1/2" diameter and get the head rounded. The larger bolt I had them center drill a hole in top after facing the top of the head flat. This hole will be the receiver of my now modified 3" bolt which is the anvil proper. I then proceeded to weld the tubing that will be the receiver for my now height adjustable anvil assembly to the lower leg again checking for square as I tacked it on.

#7. I mock assembled all of the parts so far to check for proper alignment. When I was satisfied everything lined up I proceeded to weld it all up permanently. I would suggest welding no more than 1" long passes at a time moving from side to side end for end so as not to effect the alignment you have worked so hard to keep.

#8. I chose to weld in a threaded bung hole in the frame to fill it with dry sand to keep the noise down.  I had read that these are very noisy machines.  Plus I figured the additional weight of the sand would add to the stability.

#9. I welded tabs on either side and the end of the lower frame leg made from angle iron to bolt it either to a bench top or a support frame. I chose to build a support frame with wheels so I can roll it out of the way when not in use. Use your imagination on how to mount it. You could just clamp it in a vise on your bench and hang it on the wall when not in use. 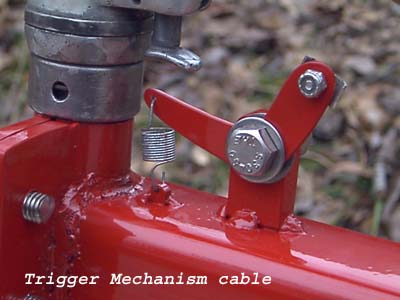 #10. I cut a bell crank to tickle the trigger on the hammer on the top leg that is cable operated. I welded a post to mount the trigger tickler and another to receive the cable end. I sand blasted the whole thing and had it powder coated by a buddy who works for a local company. The reason it's red is that was the color he had in the gun at the time.

You do not have to use the same materials I used anything will do that you have lying around.  I wouldn't use anything smaller but bigger is OK.  Round tubing for the frame is OK. The critical part is the alignment of the hammer to the anvil.  The reason I chose to make my own is the price of these tools. I am retired and living on a budget so for me buying one was out of the question. I figure I have about $160.00 invested including the machine work I want to tackle an English Wheel in the future.  If I owned a lathe I would already have one.

Paint Your Own Car!