(click here)
Click here to purchase Tamco Primers and Clearcoats
﻿ Hustler Pogo Stick Use | How to Paint Your Own Car, Auto Body Discussion Forum and Videos

After owning a “Pogo Stick” for many years and hardly ever using it I went to work for a very innovative guy who taught me some great uses for the tool that I had never thought of. It quickly became one of my favorite go to tools.

The “Hustler” Pogo stick is basically a minor “pulling” device, sort of a baby frame rack. Don’t sell this tool short, it can do some serious work, much more than you ever dreamed you could do by hand. It can be used to pull radiator supports or rear body panels. Repairing crushed rockers and your typical large dents can be made much easier.

The Pogo stick is simply a pipe about 4’ 4” long with a handle at one end and a “foot” at the other. It comes with a chain approx 6’ long with hooks at each end. The hooks are made from flat steel, one being a single sided and the other a split hook. The hooks on the Pogo stick are the exact same as the split hook on the end of the chain. They are designed to hook a chain on to them. But they also work just fine to hook them onto the part needing to be pulled. The hammer is for size comparison. See photos A, B and C. 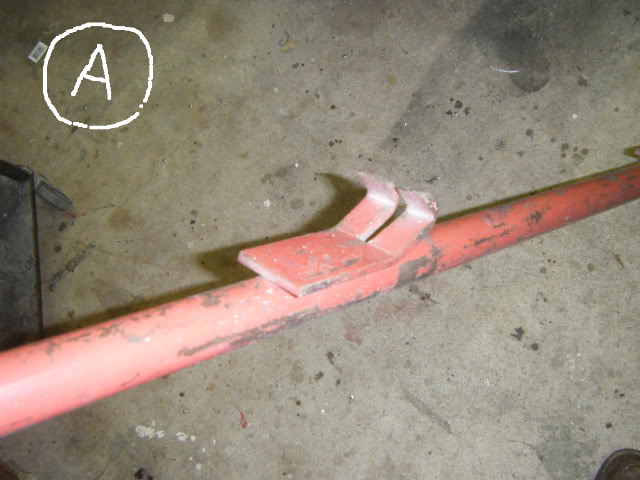 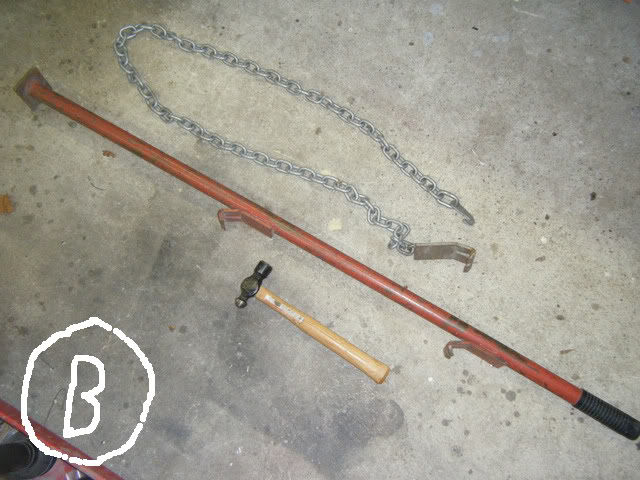 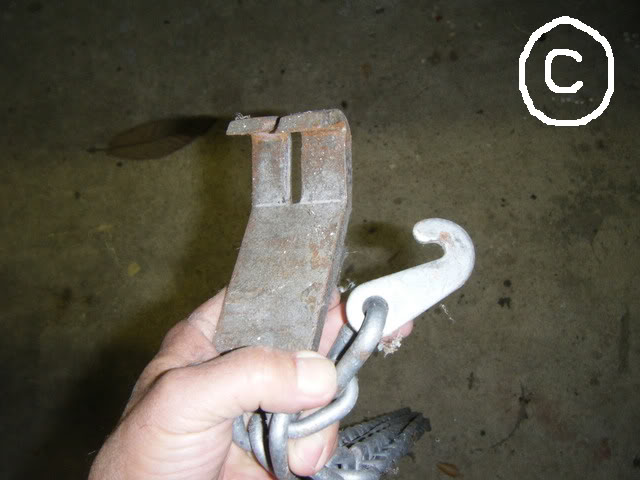 I highly recommend taking your new Pogo Stick and removing the rubber foot cover and gluing it onto the Pogo stick with weather-strip adhesive or window urethane. They don’t stay on very well at all and usually fall off very soon after you start using it.

The Pogo stick is a simple leverage tool. You put the foot against something solid (or at least more solid than what you are pulling is all that is needed) hook the chain onto what needs to be pulled and pushing down on the Pogo Stick handle (or up, if the foot is above what is being pulled) and wham, you have a jr frame rack!

You can simply hook the hook over the edge of a piece of metal, wrap the chain around it and hook the hook back to the chain, or my favorite simply putting bolt thru the hook to hold it to something like this radiator support in photo #1. 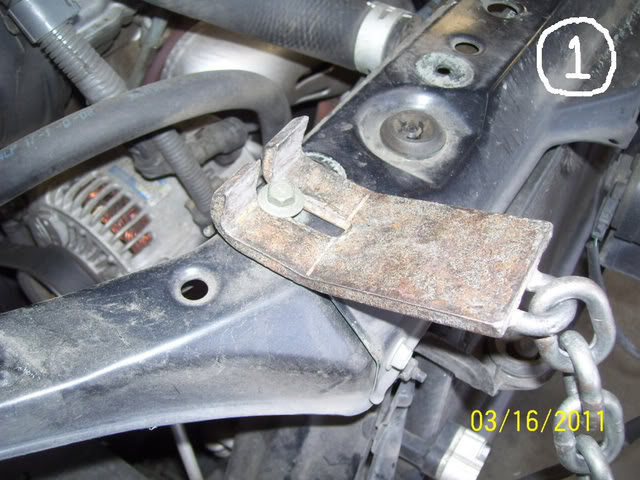 Photos number 2 and 3 show you how you have two different hooks on your Pogo Stick. They provide different amounts of leverage, and sometimes you have a choice which to use. 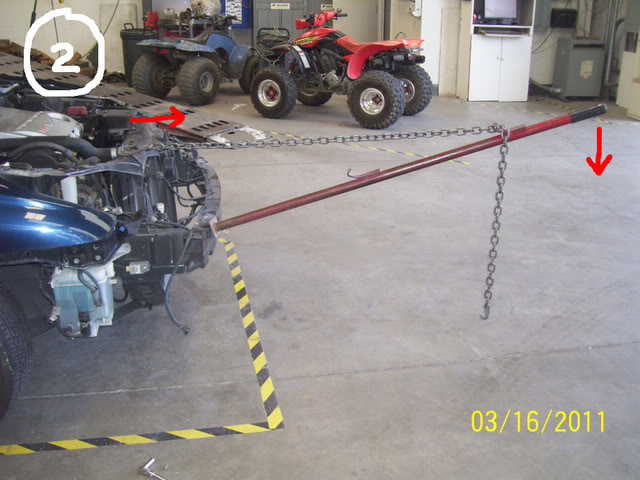 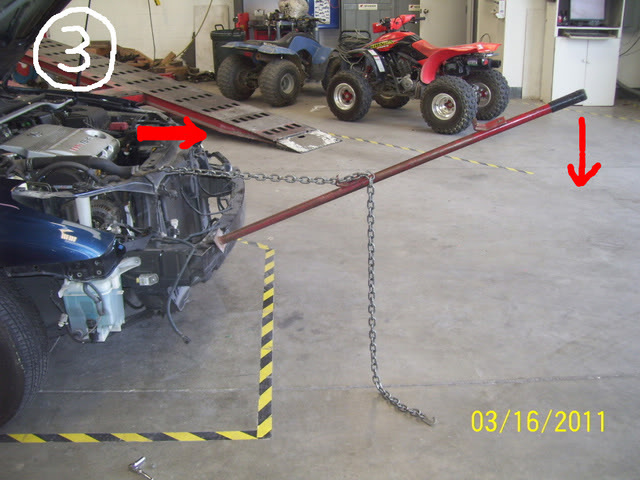 Photo #4 shows in ingenious way to hook the chain to a Vice grip. This is an old bodyman’s way of doing things. He welded an “Eye” from the hardware store to the bolt to adjust the Vice Grip! I love this stuff. I have a Vice grip designed for pipes that the chain hooks onto real well. But this is a neat trick. 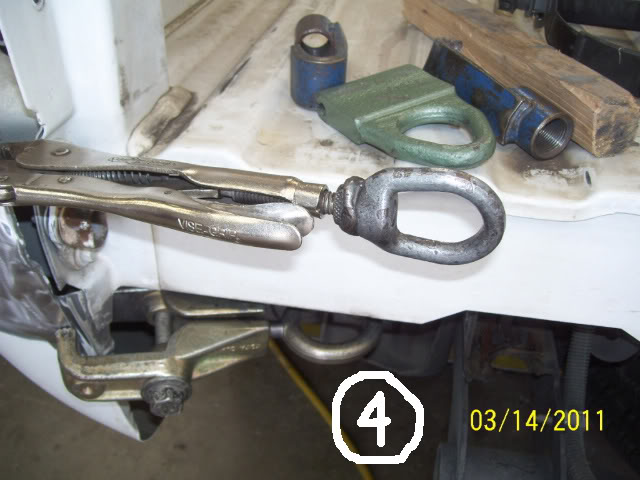 Photo #5 shows one of my “pulling tabs” for sheet-metal. It’s made from a piece of sheet-metal that I simply weld to the sheet-metal needing to be pulled. I put a little weld bead at a few locations on it where I put the Vice grip so it doesn’t slip off the tab. These tabs can be welded on and removed with a cut off wheel and reused over and over. When the edge gets funky, simply cut off the portion with the welds and use start all over. 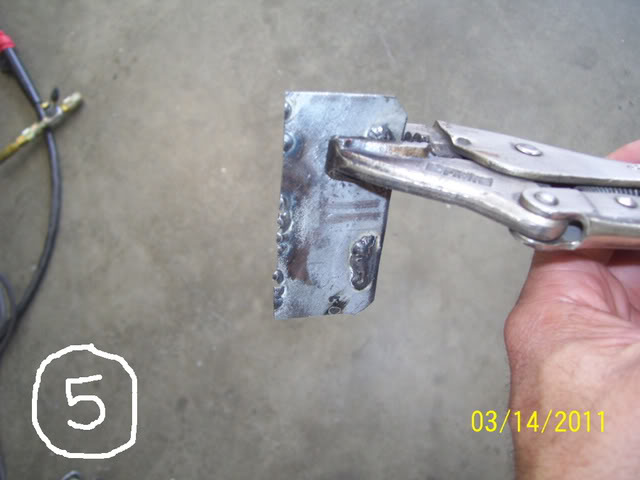 Photo #6 Here is a close up of a pull on a dent. In this case my buddy was using a tab designed for pulling that has a tool (the green piece) which slides over a rolled piece on the tab. The foot of the Pogo Stick is put up on the rear inner structure of the bed for this mocked up pull. In this case the dent was stronger than the inner structure and the structure would bend before the dent, you have options and you need to pay attention on where you are putting the foot. 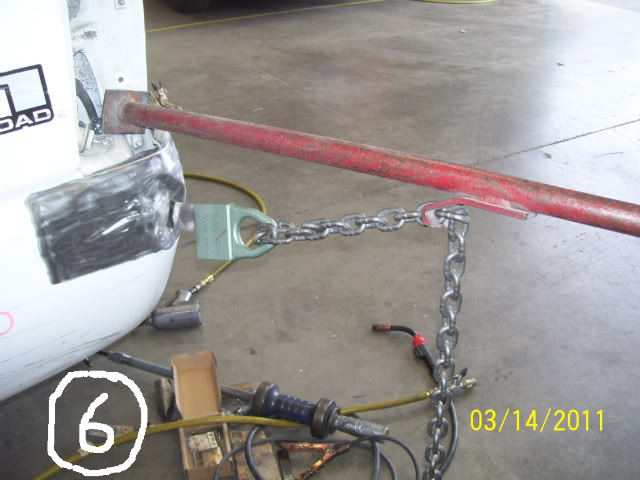 Photo #7 shows how in this case you would be pulling UP on the Pogo Stick. 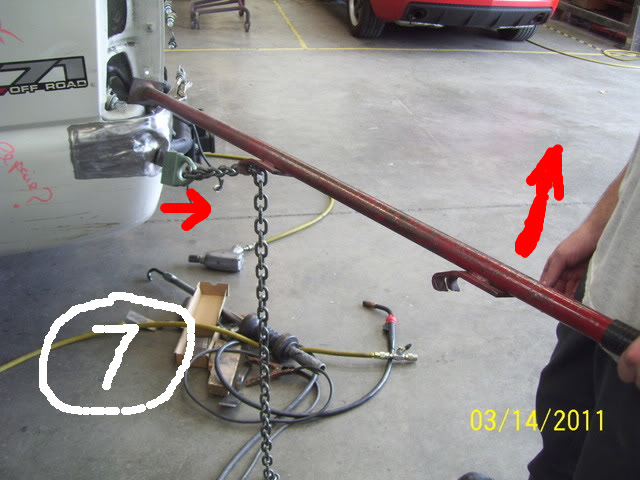 Photo #8 shows the foot of the Pogo Stick on the frame of the truck. The angle of the pull is a little clumsy and little leverage but it can be used. 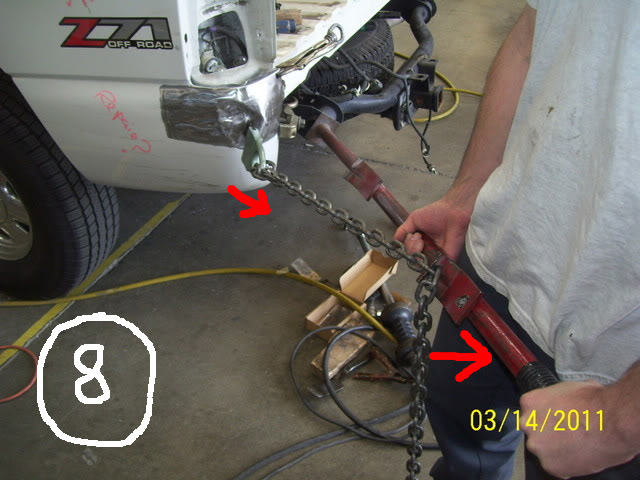 As I have said, this is a VERY useful tool and once you start using it like this you will be amazed at how many times you can go to it for your pulling needs. You can set it up and rest your foot out on the Pogo Stick and apply a steady pressure while you are tapping on a brow with your body hammer. It is only limited by your imagination.

This amazingly useful tool is only about $110! Yes you could make one, but I think by the time you bought all the materials you wouldn’t save much. The Pogo Stick is bullet proof, I mean in my over 30 years in this business I have seen way too many to count yet only have seen one with one of the hooks on the tool broken. How in the heck they did it, I have no idea. They are REALLY tough tools.

Get yourself one and following these ideas you will be using it more and more everyday with all kinds of ideas popping into your head.

Paint Your Own Car!